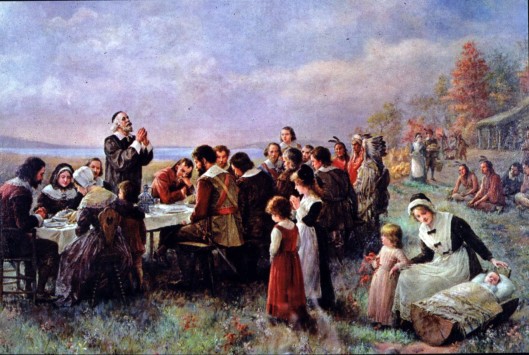 Thanksgiving is a time of the gathering together of family and friends, playing games, eating turkey, cranberry sauce, mashed potatoes, gravy, stuffing, pumpkin pie with lots of whipped cream, and some even boast of family football games. Though those are some things that we do on Thanksgiving, what does it really mean?

Really, it’s name says it all! It’s about THANKSGIVING. But, not just thanksgiving to just anyone…no…it’s all about Thanksgiving to God. And it’s not just about being thankful for the good in our lives either. The truth of this can not only be found in Scripture but also in the pages of American history.

To begin with, in 2 Corinthians 1:3-5 we read the Apostle Paul saying under the inspiration of the Holy Spirit:

“Blessed be God, even the Father of our Lord Jesus Christ, the Father of mercies, and the God of all comfort; Who comforteth us in all our tribulation, that we may be able to comfort them which are in any trouble, by the comfort wherewith we ourselves are comforted of God. For as the sufferings of Christ abound in us, so our consolation also aboundeth by Christ. And whether we be afflicted, it is for your consolation and salvation, which is effectual in the enduring of the same sufferings which we also suffer: or whether we be comforted, it is for your consolation and salvation.”

Now the Apostle Paul did not have a posh life, but rather was afflicted, beaten, ship wrecked, stoned unto death, was swimming in the sea for a day and a night, harassed, and went hungry and thirsty. This same Paul also said in Philippians 4:4-7,

“Rejoice in the Lord alway: and again I say, Rejoice. Let your moderation be known unto all men. The Lord is at hand. Be careful for nothing; but in every thing by prayer and supplication with thanksgiving let your requests be made known unto God. And the peace of God, which passeth all understanding, shall keep your hearts and minds through Christ Jesus.”

“Rejoice evermore…In everything give thanks: for this is the will of God in Christ Jesus concerning you.”

Even so, in the Old Testament we see a miraculous story of thanksgiving in 2 Chronicles 20 when the Israelites were up against 3 nations that had unjustly gathered against them. All was not good. All was not okay. And so, King Jehoshaphat called all Israelites to assemble, women and children included, and they fasted cried out to God. Then, after humbling themselves before God in repentance and desperation, God spoke to them through the prophet Jahaziel saying, “Be not afraid nor dismayed by reason of this great multitude, for the battle is not yours, but God’s…” (vs 15). And so, early the following the morning, the Israelites arose early, and stationed the Levites in front of them who lead not just in the march but in worship and praise unto God as they marched forward to the battle. And it says in 2 Chronicles 20:22 that “when they BEGAN to sing and to praise, the Lord set ambushments against” the multitude of their enemies, so that the enemy turned upon themselves, slaughtering themselves before the Israelites ever reached them!!!!!

It states, when they “BEGAN” to sing and to praise, that God then went to battle for them. As they gave thanks in the overwhelming situation that they had no power in themselves to overcome, God heeded their thanksgiving and overwhelmed the enemy on their behalf.

In the book, The Hiding Place by Corrie ten Boom, Corrie relates her experience in a Nazi concentration camp during WWII. One such remembrance was that of her sister Betsy (who also was in the camp with her) who had Corrie look up and read I Thessalonians 5. As Corrie read from their precious hidden Bible (for Bible’s were forbidden in the concentration camp), she came came across verse 18 that says to give thanks in all things. That’s when Betsy encouraged them to begin right at that moment to give thanks to God in their situation. So, they got down on their knees and Betsy led in thanking God for His provision in the camp, their cramped quarters with too many people (for this meant more could hear the Gospel), and then Betsy dared to thank God for the fleas that infested their beds. Well, Corrie just could not repeat that nor agree at first, but with some prompting, she thanked God for the fleas. Later Corrie would come to realize that because of the fleas the Nazi soldiers stayed away from their barracks, and because of that, their Bibles were never found and confiscated (Excerpt from Hiding Place, pg 179).

And our own American story clearly communicates this type of thanksgiving as well, in spite of all odds, war, grief, death and pain.

To begin with, in 1618, a young Indian man by the name of Squanto, had finally earned enough money as a stable boy in England to sail home to his tribal people in America. He had been stolen in 1612 by a trader and was then sold into slavery in Spain. It was there that Spanish monks bought him, treated him well, educated him, and made it possible for him to go to England where he attained a job as a stable boy. Thus, in 1618, he set sail for his home. However, upon arriving, his came to the starkly painful realization that his entire tribe had been wiped out by disease. He was the ONLY one left.

Heartbroken and utterly alone, Squanto was adopted into a neighboring tribe called Wampanoag with friendly Massasoit as their chief.

Then, in 1620, the weary English Pilgrims had run out of options, and had petitioned the government of England to allow them passage to the Virginia Colony in America. Long had the Pilgrims been persecuted by English kings, including King James I, who had harassed, fined, imprisoned, and even unjustly killed many, like my anabaptist ancestor Edward Wightman (burned at the stake in 1612), just because they did not agree with the Anglican state church of England. The Pilgrims had even tried living in Holland. And though they found religious liberty in Holland, they also found a great deal of Catholic paganism there as well, and they worried for the future of their children. Because of this, the Pilgrims sought God for a miracle to their seemingly solutionless problem. And God provided the 66 day Mayflower voyage across the horrifically stormy waters of the autumn Atlantic ocean.

They aimed high for the fertile area of New York’s Hudson river, but because of the extreme storms, they found themselves in Massachusetts.

While there, many became quite ill from malnourishment, and for a while only 6 would be well enough to work at a time. Of the 102 Pilgrims only about 50 survived (30 of those were children), and only half the Mayflower crew that had accompanied them. Most of the mothers died because they gave their food (six kernels of corn a day) to their children.

With the Spring came the miracle of Squanto to help them and the hope of those who survived was renewed. Though much grief had overwhelmed both Squanto and the Pilgrims through the loss of their loved ones, God’s mercy and grace overwhelmed them still more. For indeed, the very land that Squanto’s people had cleared and tended and lived, was the very land that the Pilgrims finally settled upon. And, unbeknownst to the Pilgrims at the time, the land in New York that they had hoped to reach was inhabited by hostile Indians who would have had no trouble killing them. Not only this, but Squanto’s very life was a testimony of God’s goodness, not only for him that he might be saved spiritually by Jesus and physically from the plague that killed his people, but also was saved for the sake of God’s weary Pilgrims who would so need him in their new home. Indeed, miracle upon miracle was multiplied upon Squanto and the Pilgrims, because our sovereign God was in it! And all of them gave thanks in the Fall of 1621 for God’s bountiful blessings in spite of all the pain and death and suffering.

But the American story of Thanksgiving does not end there!

In 1777, in the middle of our overwhelming war for Independence, the Continental Congress felt it imperative that the infant nation give thanks to God and to pray for his blessing and help in the war. The odds were stacked against the Continental Army. It was David and Goliath, and the outcome appeared dire. Nevertheless, our fledgling government called all to an official day of Thanksgiving and Repentance.

Here is part of their proclamation sent to the 13 states:

“It is therefore recommended to the legislative or executive Powers of these UNITED STATES to set apart THURSDAY, the eighteenth Day of December next, for SOLEMN THANKSGIVING and PRAISE: That at one Time and with one Voice, the good People may express the grateful Feelings of their Hearts, and consecrate themselves to the Service of their Divine Benefactor; and that, together with their sincere Acknowledgments and Offerings, they may join the penitent Confession of their manifold Sins, whereby they had forfeited every Favor; and their humble and earnest Supplication that it may please GOD through the Merits of JESUS CHRIST, mercifully to forgive and blot them out of Remembrance; That it may please him graciously to afford his Blessing on the Governments of these States respectively, and prosper the public Council of the whole: To inspire our Commanders, both by Land and Sea, and all under them, with that Wisdom and Fortitude which may render them fit Instruments, under the Providence of Almighty GOD, to secure for these United States, the greatest of all human Blessings, INDEPENDENCE and PEACE…” (http://www.pilgrimhallmuseum.org/pdf/TG_First_National_Thanksgiving_Proclamation_1777.pdf)

But, America’s Thanksgiving did not stopped there.

Another war again riddled our young nation in the form of the Civil War. For two bloody years, battle after battle left the United States in jeopardy of complete separation. Frayed and near destruction at the hands of the talented Southern Confederacy, the Union hung by a thread. Then, in 1863, a miraculous Union victory at Gettysburg, one of the bloodiest battles of the Civil War in which approximately 51,000 men perished, arrayed the North with great hope that all was not in vain. Now, Sarah Josepha Hale (writer of Mary Had a Little Lamb) had been petitioning every U.S. president since 1827 to instate an official day of national Thanksgiving. Thus, at that point in time, President Abraham Lincoln believed it fitting to do just that. He declared an official day of Thanksgiving be celebrated on the 4th Thursday of November.

Though for years Thanksgiving had been celebrated loosely as the state’s saw fit, this for the first time in U.S. history made Thanksgiving a formal, national holiday with a set date.

In 1939, Franklin Roosevelt trying to appease businessmen, tried to change the date of Thanksgiving so as to give more Christmas shopping weeks to businesses. However, this only caused confusion, for some celebrated on the new date while others kept it on the old date. So, Congress on December 26, 1941, only a few years after the Great Depression and only a few weeks after the attack on Pearl Harbor, felt it necessary that a set date for a day of Thanksgiving unto God be made. So, they enacted a law stating that the official Thanksgiving day would remain on the last Thursday of November. And so, again, our nation in a time of war and great distress, called for a day to give thanks unto our sovereign, awesome and unchanging God.